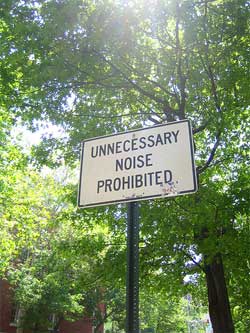 A lot of rumbling about the noise created by the (social) web has been reaching our ears recently. I’m not in this instance talking about the management of “outgoing” social media but more about how people deal with the sheer quantity of stuff which is arriving through various channels. The news feeds, tweets, emails, IM – all are part of the incoming stream. Then of course there are conversations with people in the real world (gasp!), paper-based print, TV and so on.

Fundamental, of course, to any conversation about technology is that you are ultimately destined to fail, if you’re hoping to know everything. I’ve been following the conversation at a sprint for more than ten years now and like to think that I’ve got a reasonably good grasp of the web technologies out there, but it doesn’t take a genius to recognise that the speed of change is so intense that we’re all going to get left behind sooner or later. Those who have tried particularly hard to keep up have suffered because of it – Om Malik’s heart attack and the death of Russell Shaw are pretty well publicised. While much of the media are swinging off in what is obviously ridiculous “blogging kills you” type directions, there are still some lessons. We’re all getting older (goddamit) and sooner or later we’ll be that “back in the days of X command-line interface, when the world was rosy” IT bod in meetings. Get used to it. I’m almost there already – remember the…NO, STOP..

There’s a tendency I’ve noticed when some are faced with this craziness: ostrich the problem. The argument is articulated like this: “With so much noise, maybe we’d be better off just not doing anything“. It’s either a conscious decision, or a rabbit-stuck-in-headlights paralysis. Either way, to me it’s always been the most spurious of positions to take. To steal and adapt (CC-styley!) a well-known phrase:

“where there is noise, there is signal”

Choosing to actively run away from the noise – to “not do the social web because it’s too noisy” is a hugely perverse argument. Yes, there is noise and hype…no, Twitter probably won’t last..no, you shouldn’t be on Facebook just because you can…but the point as far as I see it is this: the social web has signal far above the hype: signal far stronger than the noise, provided you can take a step backwards and look at the direction of travel rather than the individual paths being walked. The social web is important because it lets us connect, not because it lets us tweet.

There’s no doubt that the noise is intense – unfiltered, it is way more than most of us can cope with. Here’s a (probably incomplete) list of my current inputs. Every one of them is a stream of information but also a potential distraction, red herring, attention-grabber, too:

I may be in the upper quartile of “wiredness” but I’ll bet most of you are exposed to these, and some possibly more.

As many commentators have pointed out, as the noise continues to grow (which it will), the signal to noise ratio drops and the need for us to find mediated experiences will become ever more important. My good friend Dan Zambonini pointed me to this excellent blog post by Kevin Kelly. Here’s a quote:

“I have tried to temper my celebration of the bottom with my belief that the bottom is not enough for what we really want. To get to the best we need some top down intelligence, too. I have always claimed that nuanced view. And now that crowd-sourcing and social webs are all the rage, it’s worth repeating: the bottom is not enough. You need a bit of top-down as well.”

He’s right of course – the lesson that we all take away is that although the technologies get more “intelligent” (dare I say, “Semantic”..?), the noise is probably increasing at a far greater rate. Net result – at least a cancelling-out of the “filtered benefit” and more likely – just more and more noise.

The human author – the topdown influence in Kelly’s post – is the conduit by which everything is managed. This role isn’t going anywhere, but it’s easy to forget this when we’re all getting excited about the machine -processable web, the API, Twitter and so on.

The human element is always going to be the single most important thing in the equation, which is exactly why the social web is so important, and can’t – or won’t – be ostriched.

RSS is the new social